We develop and use AAV viral vectors for a wide variety of applications, i.e. for expression of Parkinson´s disease related proteins and genetically encoded sensors (e.g. for quantification of levels of calcium, ATP, ROS, cAMP etc.), both in cultured neurons and in the rodent brain. Expression of proteins or regulatory RNAs can be targeted to specific cell types or to specific sub-cellular organelles. The AAV toolkit offers extraordinary efficacy, safety and flexibility, in basic science but also in development of gene therapy. 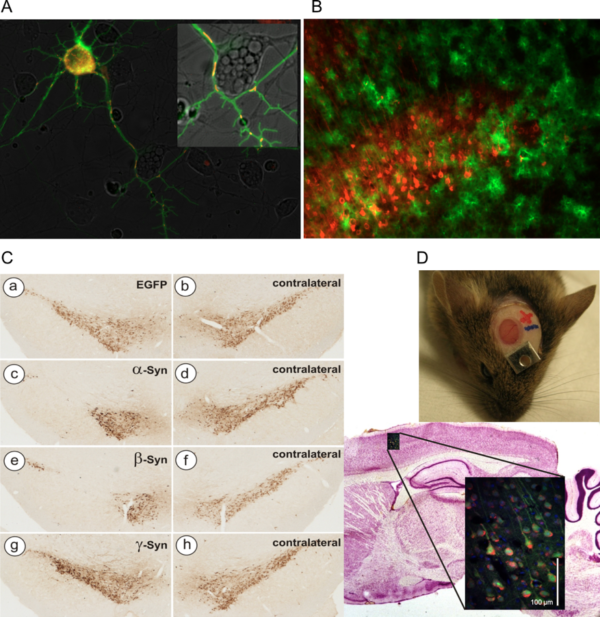 Examples of AAV vector applications routinely used in the lab

Molybdenum cofactor (MoCo) deficiency is an ultra-rare disease causing early neonatal death. MoCo is synthesized in the liver and functions as an essential co-factor for enzymes detoxifying sulphur components. During pregnancy maternal supply of MoCo prevents lesions, but very soon after birth highly toxic sulphur and xanthine deposits in the brain cause irreversible damages. MOCS1A/1B deficient mice were generated by Jochen Reiss (Dept. of Human Genetics, University Medicine Göttingen), and in a collaborative project we developed an AAV-based gene therapy protocol resulting in healthy animals after liver gene transfer (Kügler et al, Am J Hum Genet, 2007). Before such gene transfer very early after birth may become reality, several important questions must be addressed: due to the episomal nature of AAV vector genomes, they are heavily diluted by the massive cell divisions of hepatocytes during growth of the liver. Thus, will a single dose of vector applied into the neonatal liver result in sufficient MoCo supply for a human lifetime? Does this early application of AAV cause tolerance against the vector, allowing re-application at a later time without provoking immune reactions against the vector? And if tolerance against the therapeutic AAV is achieved, how will this impact on the natural infection with wild-type AAV that occurs in most humans during childhood?

Major neurodegenerative disorders like Alzheimer´s or Parkinson´s disease are characterized by a multifaceted etiology and disease progression. Thus, it is unlikely that a single target will be identified, modification of which might halt disease progression or even revert symptoms in the majority of idiopathic patients. To circumvent this issue, neurotrophic factors (NTFs), that are able to stimulate multiple survival-promoting pathways are considered a valuable option to prevent further loss of neurons and even to restore neuronal functionality. However, the enormous potency of these molecules is a solid basis for side effects as well. As NTFs cannot cross the blood-brain-barrier, their expression within the CNS by means of gene therapy is currently considered the optimal route of delivery. As a drawback, gene therapy in its current layout is an irreversible process, meaning that in case of excess supply of NTFs, expression cannot be stopped, nor can the expression level be regulated according to individual patient´s needs.

In order to provide an alternative, we have developed and further optimized an AAV vector system that takes advantage of pharmacological control over transgene expression. The FDA-approved human drug Mifepriston (Mfp), a synthetic steroid, controls expression of the neurotrophic factor GDNF through the so-called “GeneSwitch”, enabling us to tightly control the level and duration of GDNF expression in the brain. The system has proven to work favorably in a rat model of Parkinson´s disease, providing robust recovery from motor impairments (Maddalena et al, Mol Ther Nucl Acids, 2013; Tereshchenko et al, Neurobiol Dis, 2014; Chen et al, Exp Neurol, 2018). While in the immune-privileged environment of the human brain it is unlikely that the short yeast-derived peptide component of the “GeneSwitch” provokes immunological consequences, we still consider it to be necessary to conduct immunological studies in non-human primates, which are underway to demonstrate safety. Prove of absence of peripheral immunity against the “GeneSwitch” would also enable use of this regulated gene therapy concept in organs outside the CNS. 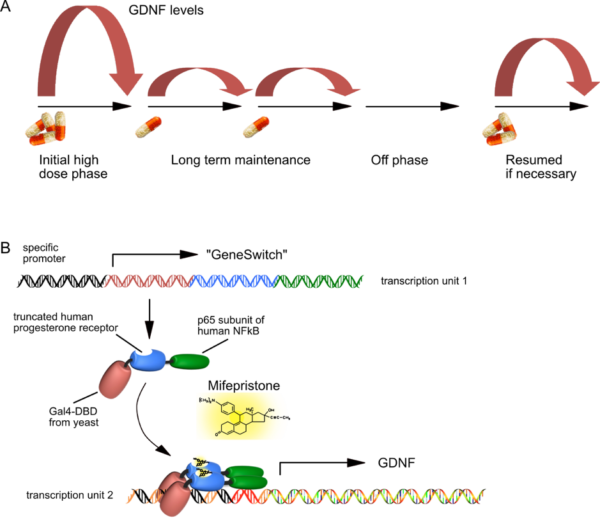 AAV are very small viruses, and thus can package only a quite limited transgene capacity of about 5000 base pairs, of which about 500-1000 bp are necessary for transcriptional control elements like promoter, enhancer and polyadenylation sites. This is unfortunate as several promising gene therapy candidates in sensory systems like retina or inner ear exceed this size by far. Due to their relatively small size, good accessibility and partial protection from immune responses towards the vectors, sensory organs are probably the best suited targets for successful gene therapy approaches in the near future. The Otoferlin protein is defective in a fairly large percentage of people suffering from hereditary hearing loss. Otoferlin is crucially involved into the auditory signal transmission process from inner hair cells to spiral ganglion neurons of the inner ear. As Otoferlin´s cDNA comprises about 6000 bp, it is not suitable to be packaged into a single AAV vector. In addition, we and other groups have demonstrated that vectors with enhanced transgene capacity such as lentiviral or adenoviral vectors are not suitable for inner hair cell transduction.

Thus, in a collaboration with Ellen Reisinger (Dept. of Otorhinolaryngology, University Medicine Göttingen) we exploited a dual AAV vector system in Otoferlin -/- mice, where the 5´-part of Otoferlin was incorporated into one AAV vector, and the 3´-part of Otoferlin was incorporated into a second AAA vector. Appropriately positioned splice sites allowed for reconstitution of full length Otoferlin cDNA in transduced inner hair cells, and enabled a partial but still impressive recovery of auditory function (Al-Moyed et al, EMBO Mol Med 2019). Confirmation in large animal´s ears will now have to prove that the vector application strategy is feasible in humans. 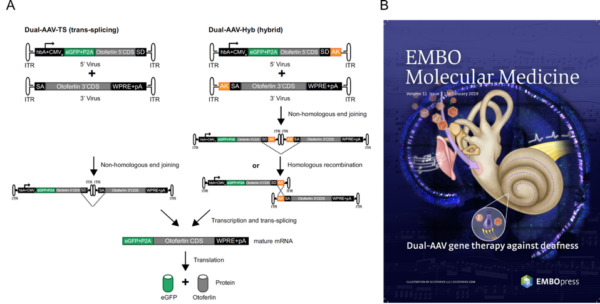 The synuclein protein family consist of three closely related proteins, a-, b-, and g-Synuclein. They all show very little secondary or tertiary structure in solution, and are thus members of the ever-growing family of “unfolded” proteins. a-Synuclein can form protein aggregates under certain conditions, similar to other proteins linked to “aggregopathies” like Tau, Aß or Huntingtin. b-Synuclein was long thought to be an anti-aggregating counterpart to a-Synuclein, but we have recently demonstrated that it forms proteinase K-resistant aggregates in the rodent brain very similar to a-Synuclein (Taschenberger at al, Ann Neurol, 2013). a-Synuclein is intimately linked to the etiology of Parkinson´s disease (PD), as mutants and gene multiplications of a-Synuclein are directly causative for parkinsonian symptoms, and aggregations of a-Synuclein are found in all idiopathic PD patients. In order to better understand how a- but also ß-Synuclein inflict on neuronal physiology we use optical live imaging and biochemical tools in cultured primary neurons and in the rodent brain. An example of how we think pathophysiology is induced in mitochondria is illustrated below (deduced from Toloe at al, Front Mol Neurosci, 2018). 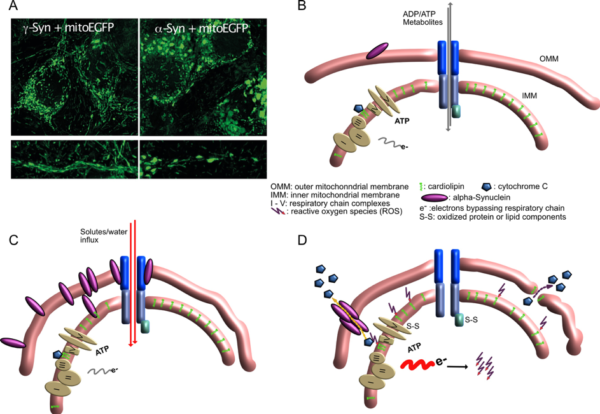 Neurons within the brain but also cultured primary neurons in a dish form interconnected networks which often show synchronized electrical activity without any external stimulation. We exploit this phenomenon to study the effects of the synucleins on neuronal activity and to elucidate the relative contribution of a-Synuclein´s interaction with ion channels, synaptic vesicle release and recycling or synaptic and neuritic structural integrity. This model allows to study pathophysiology induced by synucleins independent from neurodegeneration.

This Is A Custom Widget

This Sliding Bar can be switched on or off in theme options, and can take any widget you throw at it or even fill it with your custom HTML Code. Its perfect for grabbing the attention of your viewers. Choose between 1, 2, 3 or 4 columns, set the background color, widget divider color, activate transparency, a top border or fully disable it on desktop and mobile.

This Is A Custom Widget

This Sliding Bar can be switched on or off in theme options, and can take any widget you throw at it or even fill it with your custom HTML Code. Its perfect for grabbing the attention of your viewers. Choose between 1, 2, 3 or 4 columns, set the background color, widget divider color, activate transparency, a top border or fully disable it on desktop and mobile.